Putting transformative experiences into words can help to make sense of them. Being able to make an immediate difference to people when volunteering in the cities of northern Japan one month after the tsunami was more of a gift to myself even than to those we were helping.

Helping rebuild lives in Tohoku after the quake 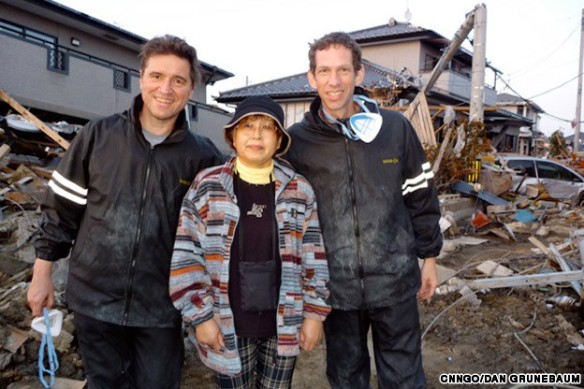 I’d never volunteered for anything like this before (and who had?); but — like many expats after March 11 — I wanted to help Japan, a country that has given me so much in my 20 years here.

So, when my friend Michael Anop, who runs a Tokyo talent agency, said he was going to volunteer in tsunami-hit Ishinomaki City, I decided to join him.

The days before our departure are a jumble of feelings. The desire to be charitable and a strong pull to bear witness to the devastation — so near, yet so far from Tokyo — are offset by NGOs warning against individual travel and “disaster tourism.”
Normalcy gives way

We begin the seven-hour drive north from Tokyo in strong sunshine on a Saturday a month after the quake. As news reports vividly show, the Tohoku expressway is already repaired — an amazing demonstration of can-do.

Aside from the Japanese Self-Defense Force convoys and a sense of foreboding as we slip through Fukushima Prefecture, the trip is uneventful.

It’s not until we approach the coast near Sendai that we enter the 300-square-kilometer zone of senseless ruin left by the tsunami.

When we get to the the Ishinomaki Volunteer Center — based at a university campus — we find it’s managed efficiently. 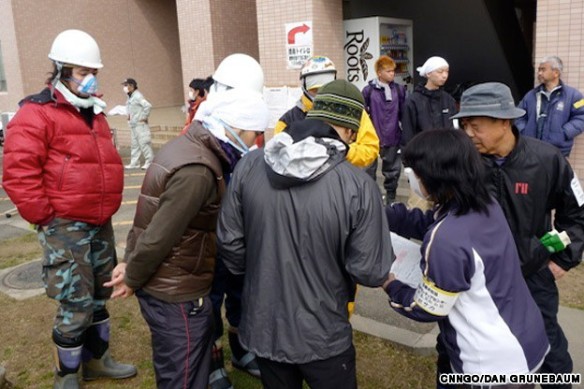 Officials at Ishinomaki Volunteer Center dispatch workers to get the cleanup started.The city counts 5,000 dead and missing among its 160,000 residents, but being larger than the towns wiped off the map further up the coast, it has retained its administrative functions.

New arrivals are sorted into groups and dispatched to assist the residents of tsunami-hit houses. Our first bunch of helpers includes people from Kobe who experienced the 1995 earthquake.

We make our way toward the residential areas behind what was once Ishinomaki’s thriving port. These prosperous neighborhoods, which bore the brunt of the wave, now look carpet-bombed. Our job consists of clearing away debris and mud so survivors can pick through the remains of their lives.

The volunteers’ assigned task is to push aside twisted metal and broken glass to access homes and retrieve belongings. Another important job is unstated: to listen to the harrowing stories that flow from survivors’ mouths.

Volunteering in IshinomakiVolunteers Anop (left) and Grunebaum with survivor Toshiko Hashimoto, who sheltered on the second floor of her house when the tsunami struck.Toshiko Hashimoto, whom we help the first day was lucky. The industrial silos standing between her home and the sea blunted the force of the wave.

Her house is now a ruin, but when the tsunami struck it remained largely upright, allowing her to shelter on the second floor as the water rose. Depression may set in, but for the moment she’s glad to be alive. 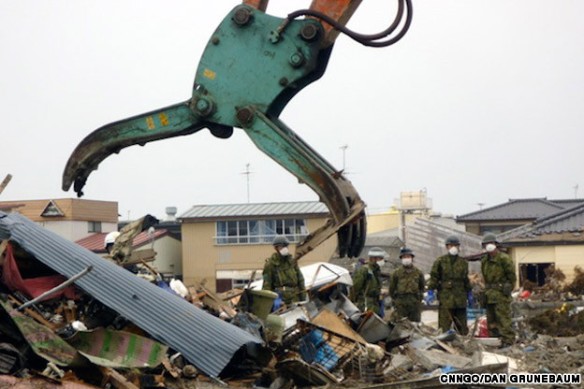 The next day’s elderly couple is not taking it so well. The woman cries as we pull once-elegant, but now bedraggled and sodden, kimonos from a chest. Their house is in even worse shape — a car is lodged in the living room and rotting fish litter the second floor. I hesitate to ask their story.

Camping in northern Japan’s early spring is cold, but awareness of the hundreds of thousands left homeless here silences any complaints on our part. Packed into drafty gymnasiums, they face an uncertain future of temporary housing and few jobs in a region whose mainstay fishing economy no longer exists.

This is not Haiti, but many still rely on soup kitchens and handouts of clothing and daily necessities.

Evacuees at Ishinomaki Junior High School humbly bow and accept the small gifts of clothes and toys we bring, even as an aftershock rattles the gym, bringing with it another tsunami warning.

It’s with relief, but also a wish to have done more, that I leave the noxious mud and endless garbage behind three wearying days later. I hitch a ride with a kindly, middle-aged Tokyo taxi driver named Miki Tsurikawa, who was raised in Ishinomaki.

He thanks me and says that as long as people come to work and not to gape, anyone is welcome. There is plenty left to do.

Back in Tokyo, where cherry blossoms are already collecting on the ground, I’m inevitably reminded of the fragile stability of life here — and hoping the people of Ishinomaki never need to return the favor.