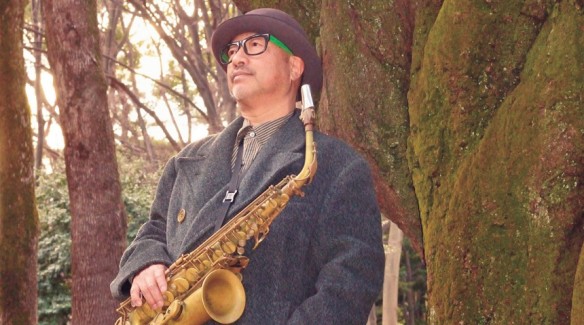 When Metropolis connects with Kazutoki Umezu at his home in Tokorozawa, the jazz saxophonist is coming off a five-night stint at venerable Shinjuku jazz club Pit Inn. Umezu has hosted annual Oshigoto (“Big Job”) residencies there for two decades, an indication of the central spot the still-babyfaced 65-year-old occupies on Japan’s jazz scene.

“In the past, I did 20 nights in a row—so this is mellow in comparison,” he laughs. “I wanted to do a week, but the timing didn’t work out this year.”

Oshigoto gives Umezu a chance to stretch out and call together the diverse ensembles that characterize a wildly eclectic career. Over the years, there’s been the jazz-rock-tinged Kazutoki Umezu Kiki Band, the Eastern European-flavored Komatcha Klezmer, collaborations with avant-garde dancers, and guest spots with everyone from Japanese rock legends RC Succession to the late American blues lion B.B. King.

The Sendai-born Umezu—who often returns to play for evacuees in Miyagi Prefecture—turned on to jazz in the late ’60s. It was a time when the music was everywhere in Japan.

“I wasn’t thinking to become a jazz musician,” he recalls, noting that students of his generation came of age at Japan’s numerous jazz kissa coffee shops—think Haruki Murakami. “I was exposed to the music of composer Toru Takemitsu, and became interested in improvisation. I was studying classical clarinet, but then I wanted to try improv. I asked my jazz-playing friends, and they said, ‘Learn jazz, it’s all about improvisation.’”

Happening to buy an album by the late, great free-jazz sax master Ornette Coleman, Umezu became hooked by the adventurous spirit of the scene. Like many aspiring Japanese jazz musicians, he set out for New York City in 1974, where he began playing with second-generation musicians of New York’s fertile downtown scene, like Lester Bowie and David Murray.

Returning to Tokyo in 1976, Umezu fast became a linchpin of Japan’s avant-garde, with a gutsy sax sound and freewheeling musical appetite. These days, he finds himself in the position of being a jazz elder statesman, and ambassador for Japan’s jazz community overseas.

Intriguingly, Umezu says the audience for jazz in Japan currently trends heavily toward women. “I’d like to know myself why more young men aren’t listening to jazz anymore, but women are,” he says. “Men seem more interested in games or anime or idol music. I’m not sure why, but women seem to have a more adventurous musical spirit than men these days.”

Not that Umezu is overly worried about pulling an audience. He’s playing over 20 dates the month we talk, and observes that Tokyo probably has more live jazz clubs than any city on Earth.

“Some of them are rock concerts where I appear as a guest,” he says. “The more different styles I play, the more sense of freedom I have in my own playing. I feed off other musicians … I can’t imagine playing with the same people all the time.”

Umezu’s newest offering is his all-horn band Chaba Brass’ Kabuongkyoku—an old term for “song and dance” (“kabu” has the same kanji character as in “kabuki”). It’s an astringent dose of horns and strutting rhythms, fronted by Umezu’s restless sax explorations.

Yet Umezu is cognizant of time’s passage. These days, a song’s inspiration can come from a reminder of mortality.

“My newest song is about Mitsuo Omura, who produced many of my international tours over the years,” he reflects. “He died in November. It’s incidents like the death of a friend that bring out new songs in me these days. It’s a sad waltz, with a European flavor.”